The Journey to School


The journey to work is indeed an important one.  The journey though is not so clear for international school teachers when they are looking for jobs at schools in cities/countries to which they have never been.  So let’s share what we know!

One of our members, who works at the American Embassy School New Delhi (India), described her way to work there as follows:

I have been working at the American Embassy School (AES) in New Delhi for the past year. My journey to school starts every morning at 7:45am (March 2018) when I leave my apartment. I consider myself pretty lucky because the whole commute takes less than ten minutes and I can walk.

(The gardens on the Bulgarian Embassy grounds.)

The grounds of the apartment complex are quite beautiful. When I leave my apartment, I can hear birds chirping and see the sun shining (at least, I can in the spring and summertime – in the fall and winter there is quite a bit of pollution). But, this time of year, March, the sky is blue and there is bougainvillea blooming everywhere. The bright pink flowers bring a profusion of color to the landscape.

(Bougainvillea along the walls of the Bulgarian Embassy Compound.)

The gardener waves to me as I walk past. He’s busy feeding some of the many cats that live on the compound. There is a mama cat with four kittens who always say hi. They like to hang out in the backyard of the building. Every apartment comes with a terrace and garden, which is quite nice. There is also a pool that we can use, some barbecue grills, and a playground with a trampoline for kids. 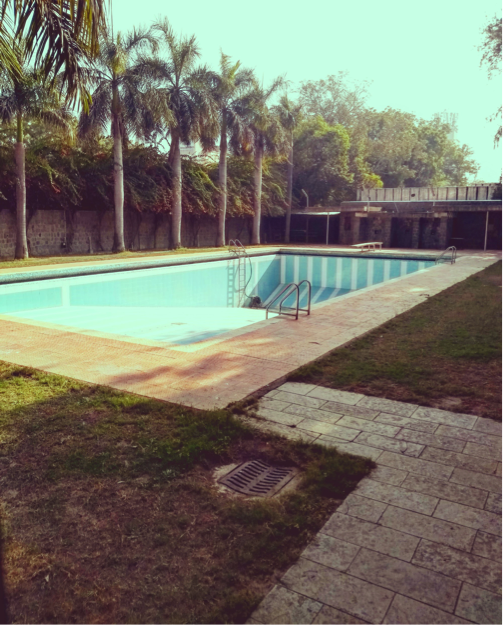 (The pool at the Bulgarian Embassy – it’s filled from April to September.)

The apartment complex is a walled compound and there is a guard at the entrance 24/7. On my way out of the complex, I say to the guard “Namaste, Aap kaysayhey?” and he replies “Mayen tikh hoon.” I step out of the quiet of the Bulgarian and on to the street. There is color everywhere and the bees are humming around. It’s warm and breezy, maybe 70 degrees fahrenheit, and the high for the day will be close to 90F. 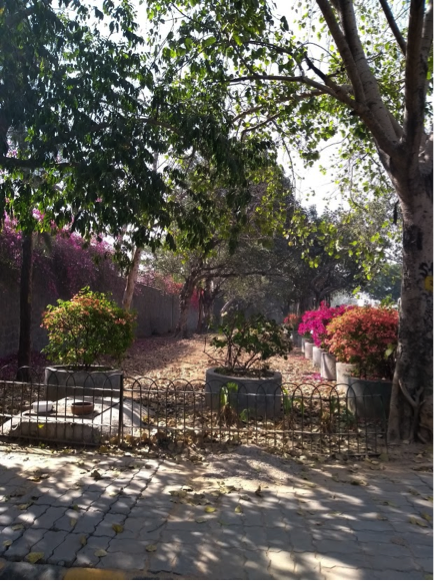 (The outside of the Bulgarian Embassy.)

I turn right and start walking. Along the way, I pass yellow and green auto-rickshaws (the traditional mode of transport in Delhi, very similar to the tuk-tuks of Bangkok), city taxis, motorbikes, and the ever ubiquitous white Suzukis that are used by Uber drives. Uber has recently become the preferred method of transport in Delhi and the white cars are everywhere. That’s one of the reasons why the traffic in the city is so bad. The proliferation of Uber. Thankfully, I don’t have to drive to get to school.

The walk is lovely. I pass the grounds of the Russian Trade Federation and the Ravi Shankar Foundation. There are bushes and yellow flowers and everything has been newly trimmed and smells like cut grass. I think most people who come to Delhi would be surprised by how green the city is. Although it’s home to twenty-five million people, there are quite a lot of trees. 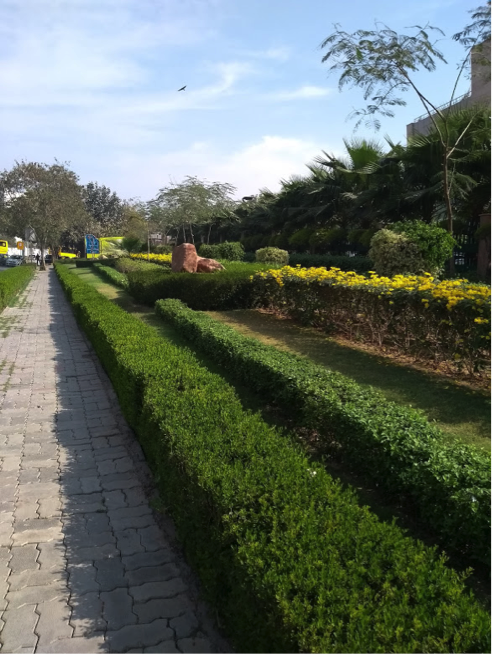 (The entrance to the Russian Trade Federation.)

A sweet yellow dog comes up to me and says hello. Delhi has lots of street dogs and they are, for the most part, super cute and very friendly. I give yellow dog a pat on the head and continue on my walk. I pass a giant banyan tree, it’s roots all twisted and gnarly. I like the way the sunlight looks when its coming through the leaves. Everything is golden and shimmering. (Yellow dog outside the British School.)

The traffic on the street in the morning is heavy because the British School is on this street. It’s across the street from my own school and parents and drivers are dropping their kids off for the day. I side step the traffic and continue along the street. Like I said, the whole walk only takes about 10 minutes. But sometimes I dawdle and daydream. 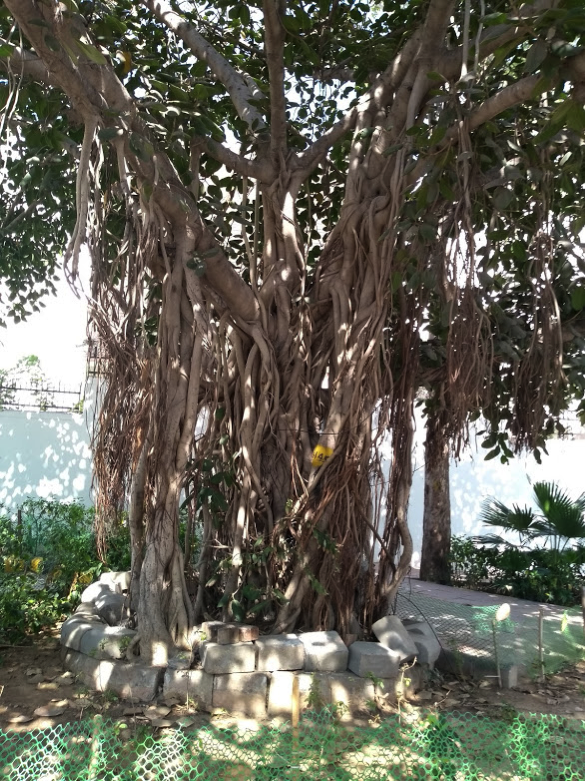 (The banyan tree in front of the British School.) 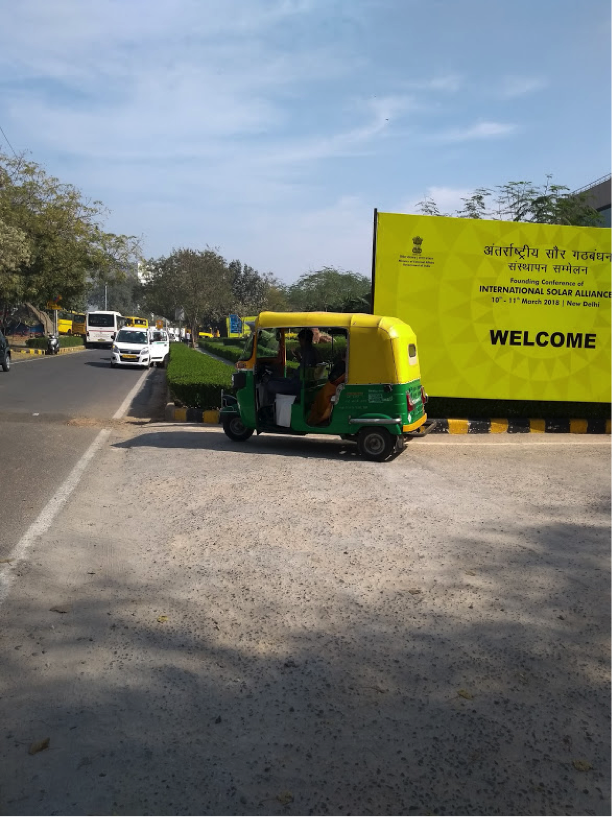 (The yellow and green auto rickshaw waits for someone who needs a ride. Be ready to barter.)

Across the street from the British School is Vivekanand Camp. The people living in this community have been there for generations. It’s a miracle that the camp hasn’t been torn down yet – it’s the only one still left in the Embassy area, Chanakyapuri. It’s estimated that as many as 2,000 people live in the camp. They don’t have running water. Sometimes, on my way home from school, I see the municipal water truck parked outside the camp entrance. The women come outside with buckets to fill up from the spigot on the side of the truck.

There are always kids from the camp hanging out on the street. In the morning, they are headed to school. They wear the white pants and red sweaters that signal the government school uniform. In the afternoon, the boys play cricket. They harbor dreams of being the next Virat Kohli. He’s the current captain of the Indian national team. The camp is a stark reminder of the wealth inequity that persists in India and other countries in the developing world to this day. 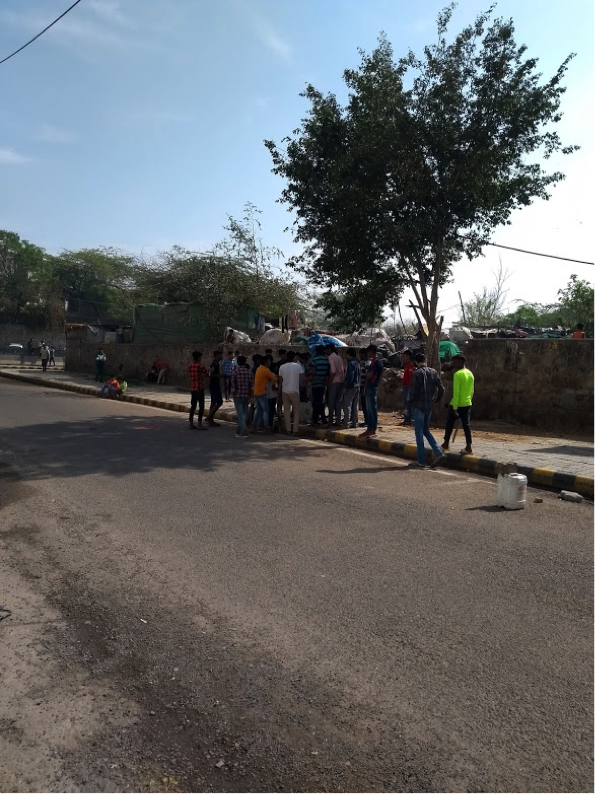 (Boys hanging out outside Vivekanand Camp.)

I cross the street after passing Vivekanand Camp and I am at the entrance to my school. The school is surrounded by high walls and security guards. Men stand patrol at the gates and there are armed soldiers present. The campus is secure and safe. It’s right next to the American Embassy. I go in gate number 4. 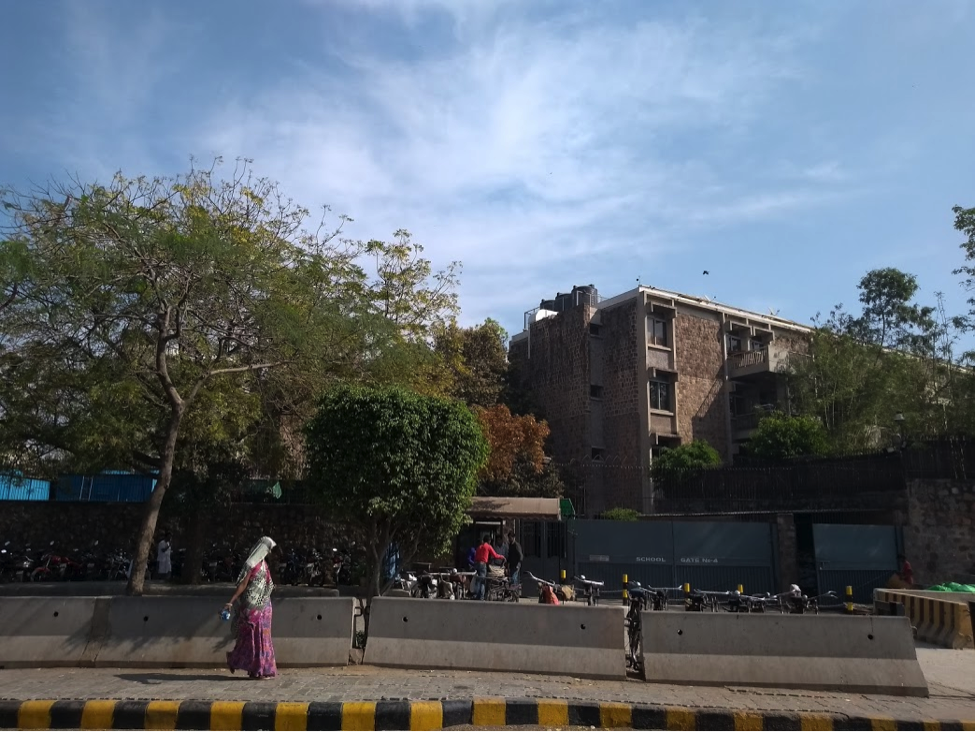 (A woman walks past Gate #4, one of the entrances to AES.)

Once inside, it’s a short walk for me to the middle school building. The AES grounds are approximately eleven acres, and it feels a lot like a college campus. There are separate buildings for the elementary, middle, and high schools, athletic fields, a theatre, a cafe, a gymnasium, a pool, and even a climbing wall. 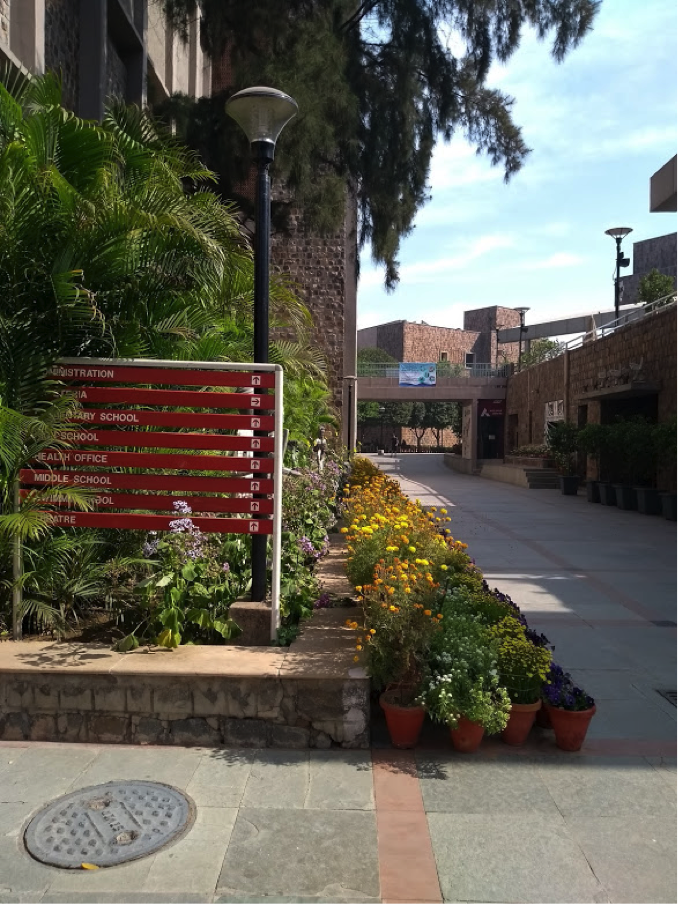 (A campus directory points the way to some of the different buildings that make up AES.)

The campus is known for being home to many different species of butterflies and birds. The biodiversity is incredible. Especially if you are used to living in a grey urban landscape. The number of gardeners who work on campus must number close to fifty. There are so many flowers to water and plants to take care of – they do an amazing job. 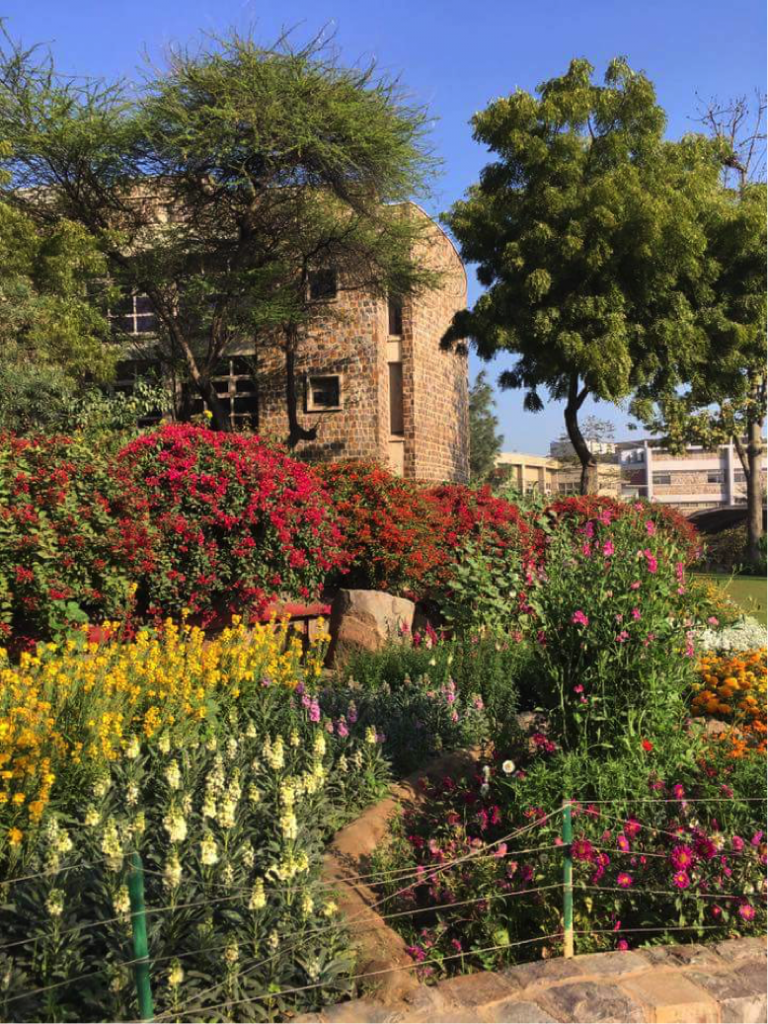 (Flowers on campus. They change with the seasons.)

I consider stopping to sit on a bench and enjoy the sunshine, but it’s close to 8am already. Teachers have to be at work at 8:00, although classes don’t start until 8:30. I’ll go to my classroom to do some prep and get ready for my classes. 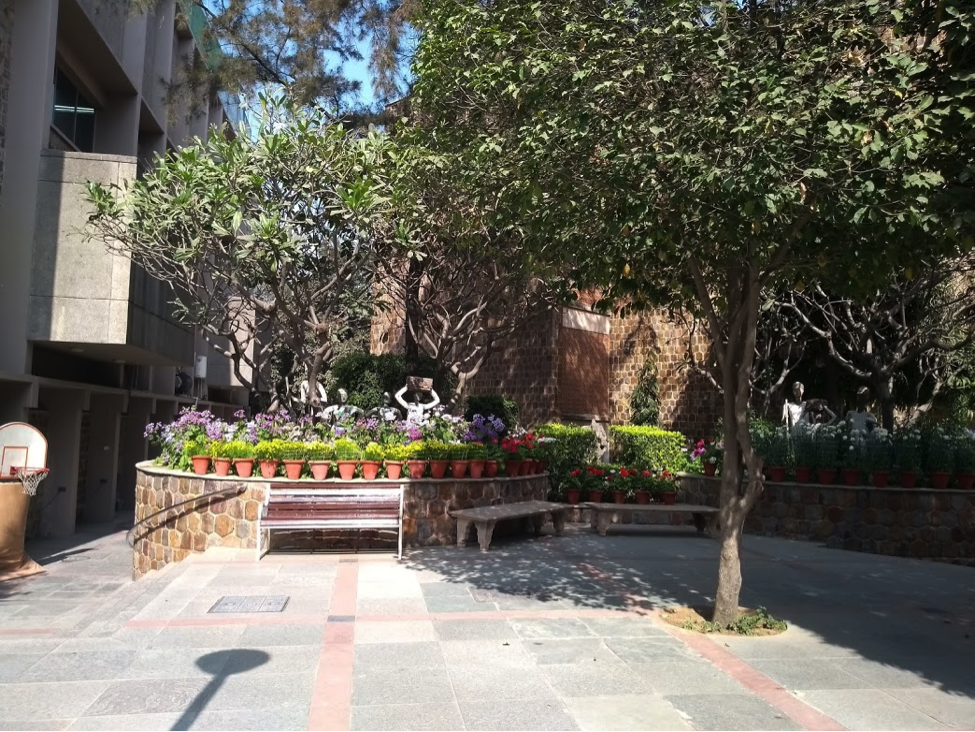 (Benches and a garden outside the entrance to one of the elementary school buildings.)

I’ve made it to the entrance to my building. I give thanks for the nature that surrounded me on my walk, blink once more in the sunshine, and go inside to greet my day. 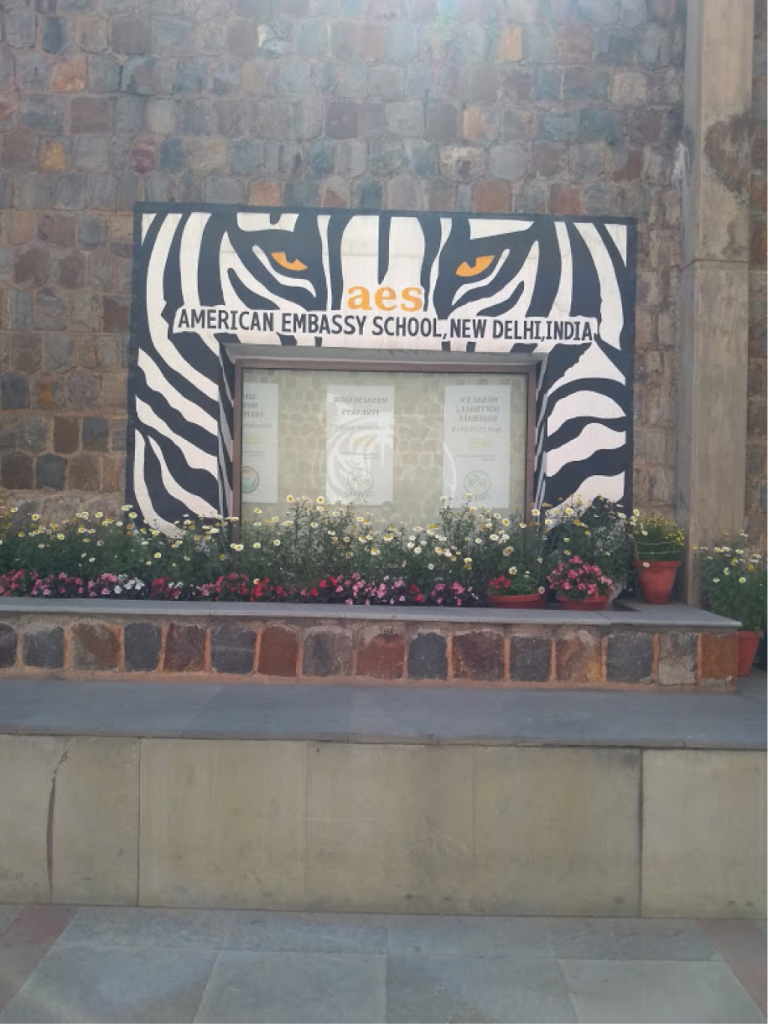 (A bulletin board next to the entrance to the middle school. Go AES tigers!)

This Journey to School article was submitted to us by guest author, Megan Vosk. Megan Vosk is a middle school MUN and Humanities teacher at the American Embassy School in New Delhi. She loves helping young people become more compassionate and engaged citizens. When she is not teaching, she likes to spend her time reading, watching movies, practicing yoga, and dining out with her husband.

What to know more what it is like to visit and live in Asia?  Out of a total of 201 international schools we have listed in Asia, 59 that have had comments submitted on them. Here are just a few:

So what is your journey to the international school you work at?  Earn one year free of premium membership to our website if you participate in this blog series – ‘The Journey to School’.  Email us here if you are interested.